Native of the village of Hawatka near Assiut, Ahmad al-Tûni is one of the last great munshidîn of Upper Egypt. In these interminable Sufi and starry nights of the villages of Upper Egypt, where dust and gloomy lights rub shoulders where the coldness of the night is opposed to a raw ecstatic fervor and a little chaotic, its malignant voice throbs. It provokes the Sufi trance in the popular Dhikr ceremony. This ritual, open to all in Egypt, takes on this Egyptian land the appearance of an ancient rite. Ahmad al-Tûni great Egyptian munshin master of Y'Inshâd religious song of Islam almost sings as a comedian of ancient times his sipa (Muslim rosary) in hand he mimics with expression his poetry the sway of his nervous body punctuates the rhythmic virulence of the duffs and the Egyptian tabla. With this force peculiar to the trance music of the Orient such as the Pakistani Qawwalli he embodies his vocal effects from poetic sentences from the great masters such al-Hallaj or Ibn al-Farid. These sentences become so many acoustic chills and notes that are lost in the emotion of the moment. 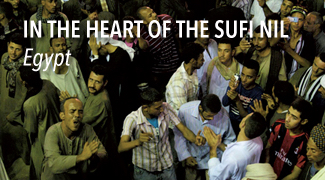 Sheik Ahmad Al Thuni is one of the last great munshids, religious singers of Upper Egypt. He embodies to himself a whole tradition, called Turas, this ancient heritage that comes from a time when Egypt still radiated with his poetry and his singing exceptional. This heritage survives somehow within the aladi world, this rural world for which lyricism, the pleasure of words still have a meaning.

"I was born without a village called Zekrahan in Abu Tig district, but my father was born here. He was a master of the Rifaiya brotherhood. I learned the Inshad, the religious song, with the Sufis even before the radio made its appearance with us. I had records that allowed me to listen to Oum Kalthoum, Munira al-Madhiya, Sheikha Sakina, Muhammad Abdel Wahab in his early days. " 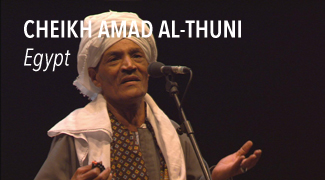