In the series Musical Instruments, here is one of the 18 numbers telling the manufacture and the
history of the piano, you will find all the other numbers of the series on Music.portavista with
among others: the brass, the flute, the organ, the violin, the guitar, the oboe, the drums, the
harpsichord, the harp ...
The appearance of the first clavichord genuine keyboard instrument dates back to the second half
of the fourteenth century. Until the early eighteenth century the clavichord had more keys than
strings. A rope could be struck in different places making a variety of sounds. The instrument was
then placed on a table. At the beginning of the eighteenth century he was raised on foot. The box
and the lid in solid walnut were often embellished with ivory or mother of pearl. During the
seventeenth and eighteenth centuries Germany was his chosen land. 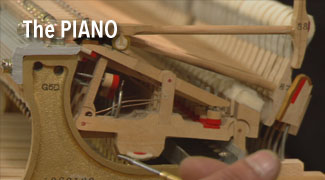